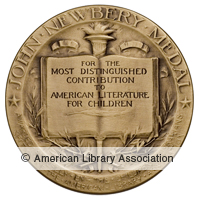 “The Newbery Medal was named for eighteenth-century British bookseller John Newbery. It is awarded annually by the Association for Library Service to Children, a division of the American Library Association, to the author of the most distinguished contribution to American literature for children.” ALA.org

Click on the titles below to view the primary source pairings:

The Undefeated, written by Kwame Alexander, illustrated by Kadir Nelson

Other Words for Home, written by Jasmine Warga

The Book of Boy, written by Catherine Gilbert Murdock

Crown: An Ode to the Fresh Cut, Written by Derrick Barnes, Illustrated by Gordon C. James

Piecing Me Together, written by Renée Watson

The Girl Who Drank the Moon, Written by Kelly Barnhill

The Inquisitor’s Tale: Or, The Three Magical Children and Their Holy Dog, Written by Adam Gidwitz, Illustrated by Hatem Aly

The War that Saved My Life, Written by Kimberly Brubaker Bradley

The Crossover, Written by Kwame Alexander

The Year of Billy Miller, Written by Kevin Henkes

The One and Only Ivan, Written by Katherine Applegate

Inside Out & Back Again, Written by Thanhha Lai