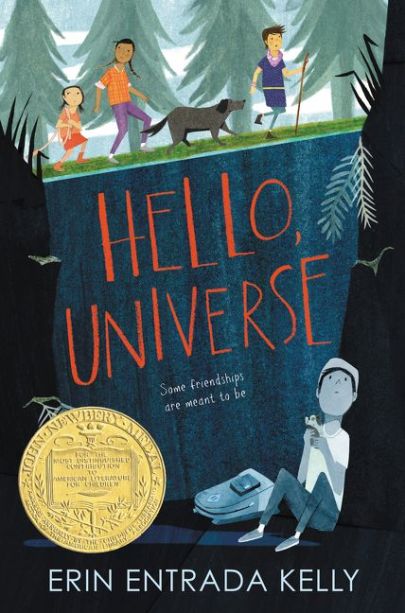 In one day, four lives weave together in unexpected ways. Virgil Salinas is shy and kindhearted and feels out of place in his crazy-about-sports family. Valencia Somerset, who is deaf, is smart, brave, and secretly lonely, and she loves everything about nature. Kaori Tanaka is a self-proclaimed psychic, whose little sister, Gen, is always following her around. And Chet Bullens wishes the weird kids would just stop being so different so he can concentrate on basketball.

They aren’t friends, at least not until Chet pulls a prank that traps Virgil and his pet guinea pig at the bottom of a well. This disaster leads Kaori, Gen, and Valencia on an epic quest to find missing Virgil. Through luck, smarts, bravery, and a little help from the universe, a rescue is performed, a bully is put in his place, and friendship blooms.

Primary Source Pairing:
After Chet maliciously drops Virgil’s backpack into an old well, Virgil has no other choice than to climb in and fetch it to save Gulliver, his guinea pig who unfortunately happens to be in the backpack. After Valencia Somerset seeings a posting for Kaori Tanaka: Physic in the local supermarket, she texts the contact number to schedule an appointment. After Virgil doesn’t show up at Kaori’s house, she decides a search party must be set up. This search party also happens to include Valencia and Kaori’s little sister Gen. And so these stories criss-cross into a wonderfully woven together story.

For this primary source pairing, invite students to study a diagram of how to properly build a well. For some students, a well may be an unknown structure. Let the diagram begin a discussion about how Virgil may have felt at the bottom of the well. Interestingly, this image was created as part of a public service campaign by the Minnesota Board of Health to train state public health workers in 1915.

This historic 1922 drawing, which had been digitally enhanced and colorized, depicted the features of an improperly located and constructed municipal ‘dug’-type well. Note the well’s location downhill from a barn, a house, and a privy. Liquid wastes from those three sources ran downhill, leaching into the soil, and then into the potable water source. Public Health Image Library

This historic diagram, which had been digitally enhanced and colorized, depicted an improperly located, and poorly constructed ‘drilled’ type well, and showed how the water supply would almost certainly be contaminated. Sources of contaminants included a barn and home. Note the woman dumping liquid waste from her front porch at right. Published in 1915, this was one of a series of instructional drawings used by the Minnesota Board of Health to train state public health workers. Public Health Image Library

This historic diagram, which had been digitally enhanced and colorized, described an improperly located, and poorly constructed, ‘dug’ type well, and showed how pollution from a nearby privy could enter the potable water supply. Published in 1915, this was one of a series of instructional drawings used by the Minnesota Board of Health to train its state public health workers. Public Health Image Library