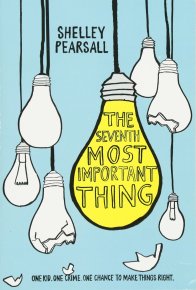 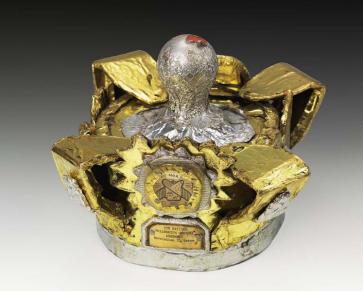 The Seventh Most Important Thing
Written by Shelley Pearsall

Publisher’s Summary:
Arthur T. Owens grabbed a brick and hurled it at the trash picker. Arthur had his reasons, and the brick hit the Junk Man in the arm, not the head. But none of that matters to the judge–he is ready to send Arthur to juvie forever. Amazingly, it’s the Junk Man himself who offers an alternative: 120 hours of community service . . . working for him.

Arthur is given a rickety shopping cart and a list of the Seven Most Important Things: glass bottles, foil, cardboard, pieces of wood, lightbulbs, coffee cans, and mirrors. He can’t believe it–is he really supposed to rummage through people’s trash? But it isn’t long before Arthur realizes there’s more to the Junk Man than meets the eye, and the “trash” he’s collecting is being transformed into something more precious than anyone could imagine. . . .

Inspired by the work of folk artist James Hampton, Shelley Pearsall has crafted an affecting and redemptive novel about discovering what shines within us all, even when life seems full of darkness.

Primary Source Pairing:
Author Shelley Pearsall writes in the Author’s Note that this story and Hampton’s artwork have remained in her imagination since she first saw The Throne of the Third Heaven of the Nations’ Millenium General Assembly 25 years ago. The story in The Seventh Most Important Thing is of a boy named Arthur and his community service after he made a bad decision that caused a man to go into the hospital. The hospitalized man was James Hampton, the local junk man who was also a unique and thought-provoking artist. For this primary source pairing, invite students to analyze the artwork of James Hampton, specifically looking closely at the Crown from The Throne of the Third Heaven of the Nations’ Millennium General Assembly. In analyzing the images of Hampton’s artwork, consider the list of The Seven Most Important Things (1. lightbulbs, 2. foil, 3. mirrors, 4. pieces of wood, 5. glass bottles, 6. coffee cans, 7. cardboard).