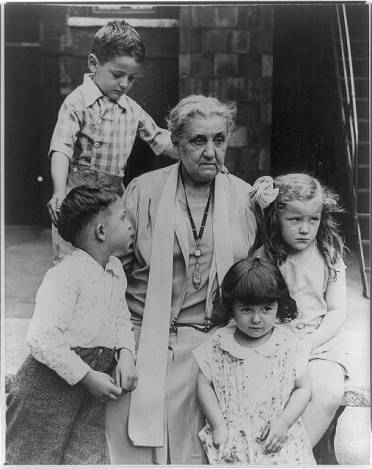 The House that Jane Built: A Story About Jane Addams
Written by Tanya Lee Stone, Illustrated by Kathryn Brown

Publisher’s Summary:
This is the story of Jane Addams, the first American woman to receive the Nobel Peace Prize, who transformed a poor neighborhood in Chicago by opening up her house as a community center.

Primary Source Pairing:
Jane Addams and the Hull House were a beacon of light in the darkness of the 1890s. In a time when women had few rights, she was at the forefront of advocating for human rights. Her vision for urban development with human welfare as a cornerstone was revolutionary for the time period. For this primary source pairing, invite students to study two pieces of Jane Addams’ history. First, an image of Jane Addams with children gathered around her. Second, a newspaper article from The New York Times on March 20, 1909, quoting Jane Addams and her opinions on healthy living conditions in the city. Discuss the images separately, and as discussions develop, encourage students to make connections between the two images.