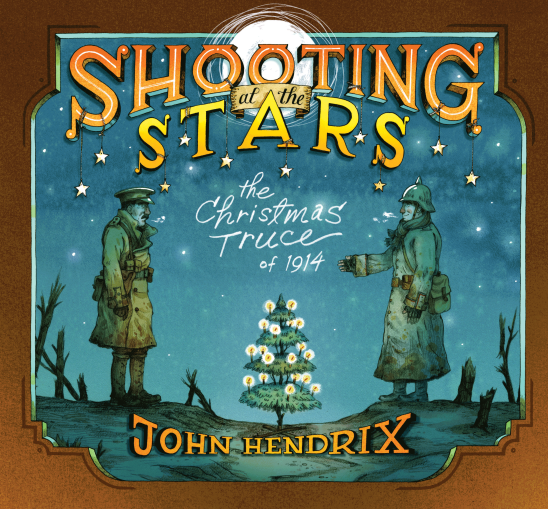 Shooting at the Stars: The Christmas Truce of 1914
Written and Illustrated by John Hendrix

Summary:
In 1914 France, a British soldier writes to his mother about the strange events of Christmas Eve and Christmas Day, when German and Allied soldiers met on neutral ground to share songs, food, and fun.

Primary Source Pairing:
Letters are powerful primary sources. Shooting at the Stars: The Christmas Truce of 1914 is written through a series of letters. For this primary source pairing, a letter from World War I is used.

When handwriting and weathered stationary are in combination, it is easy to visualize the person writing it all those years ago. “This letter from schoolboy Patrick Blundstone to his father contains a fascinating eye-witness account of the destruction in September 1916 of a Zeppelin airship near Cuffley in Hertfordshire by William Leefe-Robinson VC.” source  Print the image of the letter for students to hold and view up close. Although the art of letter writing may be lost, reading a letter from a son to his father during a war is a learning experience that will impact our students in many ways. View the text of the letter below.

‘Dear Daddy, I hope you are not alarmed, you should not be, unless you know where one of the Zepps went. I have heard that it raided London (up the Strand) and caused heavy causalities. But this I know because I saw, and so did everyone else in the house.

Here is my story: I heard the clock strike 11 o’clock. I was in bed and just going to sleep. Between 2 ‘clock and 2.30 o’clock, Lily (the servant) woke Miss Willy and told her she could hear the guns. Miss Willy woke Poolman and told him to wake me. He did so. Miss Willy helped Mrs Willy downstairs. We were all awake by now, we had a Miss Blair staying with us for the weekend. We saw flashes and then heard “Bangs” and “Pops”.

Suddenly a bright yellow light appeared and died down again. “Oh! It’s alright” said Poolman. “It’s only a star shell”. That light appeared again and we Miss Blair, Poolman and I rushed to the window and looked out and there right above us was the Zepp! It had broken in half, and was like this: it was in flames, roaring, and crackling. It went slightly to the right, and crashed down into a field!! It was about a 100 yards away from the house and directly opposite us!!! It nearly burnt itself out, when it was finished by the Cheshunt Fire Brigade.

I would rather not describe the condition of the crew, of course they were dead – burnt to death. They were roasted, there is absolutely no other word for it. They were brown, like the outside of Roast Beef. One had his legs off at the knees, and you could see the joint!

The Zepp was bombed from an aeroplane above, with an incendiary bomb by a Lieutenany Robertson (Johnson?). We have some relics some wire and wood framework.

The weather is beastly but Mrs and Miss Willy are jolly people, hoping you are all well, love to all. Your loving son Patrick.

Please don’t be alarmed, all is well that ends well (and this did for us). We are all quite safe.’