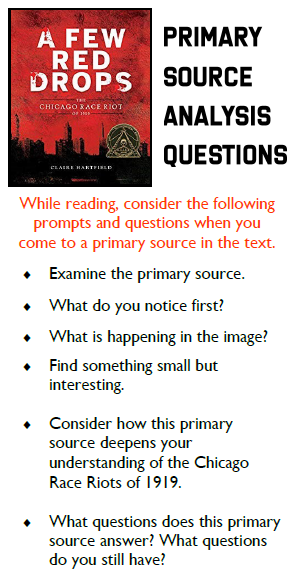 A Few Red Drops: The Chicago Race Riot of 1919
Written by Claire Hartfield

Publisher’s Summary:
On a hot day in July 1919, five black youths went swimming in Lake Michigan, unintentionally floating close to the “white” beach. An angry white man began throwing stones at the boys, striking and killing one. Racial conflict on the beach erupted into days of urban violence that shook the city of Chicago to its foundations. This mesmerizing narrative draws on contemporary accounts as it traces the roots of the explosion that had been building for decades in race relations, politics, business, and clashes of culture.

Primary Source Pairing:
Reading A Few Red Drops: The Chicago Race Riot of 1919 is like looking through a scrapbook that is equal parts intriguing and horrifying. Author Claire Hartfield has collected primary sources that support the narrative of the race riots that shocked the city of Chicago and shed light on race relations in the United States during the early twentieth century. For this primary source pairing, invite students to use the Readers’ Bookmark to guide their study of the many primary sources included in the text. Encourage students to slowly analyze these pieces of history as they read through the book.

For an additional multimodal experience to build background knowledge about the Chicago Race Riots of 1919, listen to an episode of the radio program Curious City created by WBEZ, Chicago’s NPR station called City On Fire: Chicago Race Riot 1919. This full-cast production gives listeners a front-row seat to the events that caused the race riots in Chicago in 1919 and a reflection on the last 100 years since these events rocked the city of Chicago.